The out of print pamphleteer Dobson’s diary, sixty years ago today:

I embarked on my research into sewage farm gnomes by rereading, and rerereading, the article in The Listener about a buff-breasted sandpiper. It was a pity, I thought, that no illustration accompanied the piece. Elsewhere in the same issue, the editor found room for a picture of masks in an article about masks. This exasperated me so much that I threw my new pencil sharpener, bought this morning to replace the one mislaid yesterday, out of the window and into a puddle. Why on earth the window was wide open on a day as inclement as this is a surpassing mystery, or it would be had Marigold Chew not embraced some hare-brained fresh-air fad. I hope she soon diverts her attention to something less chilly and windswept. 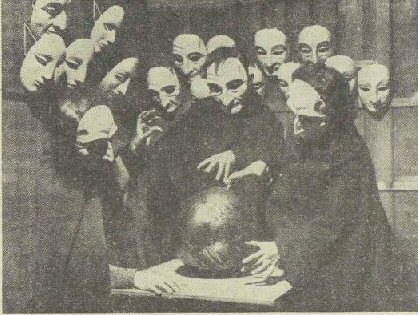 Anyway, it seems quite obvious to me that everybody knows what a mask is, and we do not need a photograph to aid our understanding, whereas I doubt there are many persons with the vaguest clue about buff-breasted sandpipers. A picture would have helped. I was going to fire off a stern letter packed with invective to the editor of The Listener, but having chucked my pencil sharpener out of the window, and my pencil being ruinously blunt, and there being no spare pencils to be found anywhere, I was at a loss, and in any case, leafing through The Listener to locate the wholly unnecessary picture of a mask, so I could refer to the page number in my irate letter, I happened upon the piece about a buff-breasted sandpiper again, and paused to reread it for the umpteenth time, and it was then I was struck by a previously overlooked detail.

R S R Fitter begins his piece “I found myself at a large sewage farm…” A large sewage farm. Now, though I know very little about gnomes, I do know that they are small, or reputed to be small. Would small gnomes be likely to farm a large sewage farm? I thought it more likely that gnomes would be found at a small sewage farm, one of a size appropriate to their smallness. Thus even at this early stage I was making progress in my research, for my conclusion seemed inarguable. At a stroke, I had whittled down the number of sewage farms at which gnomes might be found. I resolved to obtain a map and a thick black marker pen with which to expunge all large and medium sized sewage farms, leaving only the smaller ones visible. That should keep me gainfully occupied for a while at least. I have high hopes for the pamphlet which will eventually result!

Another thing I need to do, when I have the means to sharpen my pencil and thus write a letter, is to send a query to R S R Fitter, c/o The Listener. I am intrigued by that phrase “I found myself at…” It is as if Mr Fitter woke from a deep sleep, or perhaps a trance or a coma, and “found himself” at the sewage farm, as opposed to where he might have expected to be, at home for example, or in a familiar snackbar. I want to ask him if this is a regular occurrence, and if there are any other places he has “found himself”, other types of farm, other sewage-related locations, or indeed anywhere else on God’s earth.

The Year of Our Lord MCMLIII has certainly begun with some fascinating lines of inquiry. Who knows what more lies in store?