“What do you mean, ‘rewrite’ it?” asked Marigold Chew, when the out of print pamphleteer announced his plan to his inamorata over breakfast one rainswept March morning.

“I mean,” spluttered Dobson, choking on a mouthful of goosefat toastie, “That I will enter Doughty’s head, as it were, see what he saw, hear what he heard, smell the very same fumes his nostrils smelled, and from those sensual prods I shall weave a spell of words to create a new and improved Travels In Arabia Deserta, no less mad, no less massive, but better, grander, more true.”

*It is an intriguing, if foolish, idea,” said Marigold Chew, “But I wonder if you have thought it through. You will know, from Doughty’s book, if not from other sources, that the desert is a vast and pitiless place of burning heat upon which the sun beats down relentlessly. You, meanwhile, are a man whose hatred of bright sunlight – and hatred is not too strong a word – has often led me to think you have the constitution of a vampire. You are a man who thrives under overcast skies and in drizzle, Dobson, not a sun-worshipper.”

“Two points,” replied Dobson, swallowing a forkful of shredded radish, “First, I have not actually read Doughty’s book. Oh, I have skimmed it here and there, gained a feel for its strange and highly-wrought prose, weighed its mad mass in my hands, but I could not claim to be familiar with every last nook and cranny of the text. Second, I do not intend actually to travel in the burning sands of the hellish sun-bashed desert. If you listened carefully, you will have heard me say that my plan is to enter into Doughty’s head, from the comfort of my escritoire, and to summon forth the new Dobsonized Travels In Arabia Deserta through the majestic powers of imagination alone!”

“And you will enter his head how?” asked Marigold Chew.

“I snipped from a periodical a photograph of the Doughty head,” said Dobson, “And I have affixed it to the wall by my escritoire with a drawing pin. As soon as I am done with breakfast, I shall sit and gaze at the picture, in awed concentration, and as I gaze, slowly but surely the lineaments and integuments of the Doughty brain will become fused with my own brain, and swimming before my eyes shall come wondrous mirages. Mirages, after all, are the stuff of travels in Arabia Deserta, are they not? And then I will take up my propelling pencil and scribble down, in impassioned prose, all I see, all I hear, all I smell, while thus entranced. My plan is sound,” he concluded, “And I shall give birth to a masterpiece!”

Marigold Chew drained her beaker of milk slops and turned her head to look out of the window at the downpour. 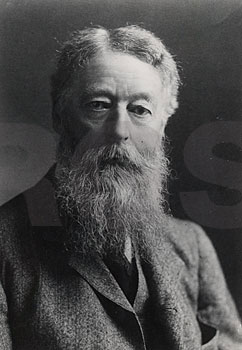 It was still raining later in the afternoon when Dobson returned from a trudge along the towpath of the filthy old canal. He came crashing through the door, sopping wet, leaving a trail of puddles in his wake. Marigold Chew eyed him carefully.

“Who is this come a-crashing through the door?” she asked, “Is it Dobson or Doughty, or some zany minglement of both Dobson and Doughty?”

By way of reply, the pamphleteer merely grunted.

“You are sopping wet and leaving a trail of puddles in your wake,” said Marigold Chew, “Nobody could look less like they had been travelling in Arabia Deserta. I’ll put the kettle on.”

As she went to the kitchen sink, Marigold Chew saw, in the waste bin, the snipped-out photograph of Charles Montagu Doughty’s head, torn in half and scrunched up, the hole pierced by Dobson’s drawing pin visible in the centre of the Doughty forehead.

“How are you getting on with your visionary rewriting?” asked Marigold Chew that evening, as she and Dobson sprawled on the sofa. From the Dansette on the sideboard came the finger-tapping hoo-cha of Xavier Cugat and His Orchestra.

“I may have to rethink my plan,” said Dobson.

“I gazed and gazed at Doughty’s head for hours,” said the pamphleteer, “But only one mirage, or vision, came swimming into my head. I could neither replace it nor dislodge it. There is not enough material there for a mad and massive book in two volumes, which was what I hoped to be able to wreak from the wild imaginings boiling in my doubled Dobson-Doughty brain. Instead, I shall have to make do with a recipe book. Or rather, a recipe pamphlet, for I have but the one recipe. That was my mirage.”

“Well, people are always on the lookout for an exotic recipe, Dobson,” said Marigold Chew, “Get it scribbled down and I shall have it typeset in the morning on the Gestetner machine in the shed.”

[My thanks to James Beckett for drawing to my attention this splendid – and genuine – recipe.]