Dobson was seething. The twentieth century’s great out of print pamphleteer was sitting at his breakfast table absolutely seething. Pausing before spooning a dollop of marmalade-style pipless jellied-eel goo into her mouth, Dobson’s inamorata Marigold Chew observed “You appear to be seething, Dobson”.

“Indeed I am, oh light of my life,” said the pamphleteer, “I have a lengthy list of exasperations which I would happily recite to you, the better that you may understand the multifarious sources of my seething.”

“Perhaps not, Dobson,” said Marigold Chew, “Instead, I would rather that you seethe elsewhere than at the breakfast table. Have you considered going to Seething to seethe?”

“I have not,” said Dobson, “And where in the name of high heaven is Seething?”

“Seething is a tiny village in the county of Norfolk,” said Marigold Chew, “About nine miles south-east of Norwich. Its church, St Margaret’s, has a round tower, though that is not strictly relevant. I am told that the villagers of Seething often seethe, about all sorts of exasperations, and I feel sure you would find a welcome there.”

“Then seethe in Seething I shall!” shouted Dobson, and he rose from the table, pulled on his Ivory Coast crop-dusting co-pilot’s boots, and crashed out of the door into the teeming downpour. So heavy was the rain, so thick the mist, so broken his pocket compass, that the pamphleteer became almost immediately lost. When, eventually, he came to a halt, he was not in Seething at all. Dobson had wandered as far as the county of Cornwall, and found himself in the tiny village of Splat. 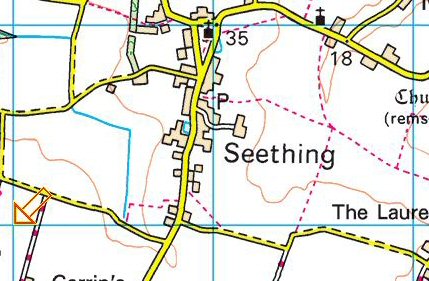