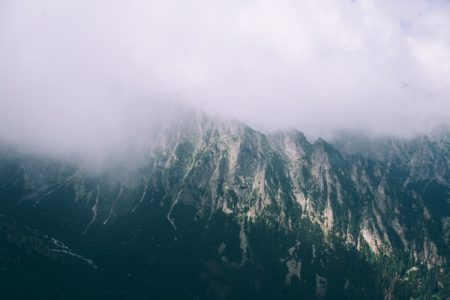 One of the more curious episodes in the life of the out of print pamphleteer Dobson is recounted in his autobiographical pamphlet 17 Years In An Alpine Mist (out of print). It begins as follows:

One day in the 1950s I was hiking in the Alps, researching all things goaty for a pamphlet I planned to write, provisionally entitled All Things Goaty In The Alps. All of a sudden I found myself engulfed in an Alpine mist. It was thick and swirling, the sort of mist one might find enswathing the three witches in a production of Macbeth, or in a film by Guy Maddin. Unable to see ahead of me, I blundered about, hopelessly lost.

I had my Alpenstock, and a flask of vitamin-enhanced boiled buttercup ‘n’ watercress water. Treading carefully, I tried to make my way down from the mountains. But no matter which way I turned, I seemed always to be going uphill, up, up, and up. The mist grew thicker and swirlier.

In prose that grows increasingly hysterical, even hallucinatory, the pamphleteer reports that several hours pass, with him plodding ever higher into the Alps. He can barely see more than an inch or two in front of him, so dense is the Alpine mist. Eventually, he comes to a halt when his path is blocked by a doorway.

The door was wooden, mahogany by the looks of it, and set within a base and brickish wall. I could see very little of the latter, in the thick and swirling Alpine mist, so I had no idea how high it was, nor how far it extended on either side. Nonetheless, I gained the distinct impression that I was standing outside a sort of half-size replica of the Winnipeg evaporated milk factory where, long long ago, I had worked as a junior janitor. This was most perplexing.

Dobson takes a glug from his flask, and then thumps his Alpenstock on the door, thrice. As if in a scene from a Hammer horror film, the door slowly opens, with an eerie and ominous creak. The pamphleteer steps inside, and is disconcerted to note that the mist is even thicker, though a bit less swirly. The door, of course, swings shut behind him, as in one of those films.

My bafflement that the indoor mist was even more engulfing than the mist outside was leavened somewhat by the fact that, after hours toiling uphill, the stone floor beneath my feet was level. But I was still lost, in silence and invisibility. And then, ahead of me, I saw emerging from the mist, a human, or semihuman, or inhuman figure. Though it was blurry and weirdly shimmering, I sensed that it was ancient, aeons-old, older perhaps than time itself. I did not yet realise that I had come face to face with a Blavatskyite Being Of Unutterable Esoteric Wisdom.

The mysterious figure beckons Dobson to follow him – her? it? – and leads the pamphleteer to a room within a room within a room within a room within a room within a room, an inner inner inner et cetera sanctum, still enshrouded in thick Alpine mist. In the centre of the room stands a stone slab, an altar, upon which are carved inscriptions in several different unknown alphabets. Otherwise, the room is bare, save for an escritoire, an armoire, an arras, a sideboard on which stands a cassette player and a pile of cassette tapes, a much-becushioned sofa bed, a pair of matching musnuds, a two-bar electric fire, a treadmill, a Toc H lamp, a Bakelite figurine of Charles W. Leadbeater, a second stone slab altar without inscriptions, an empotted pugton tree, several vases and basins, a jelly-making kit, a mysterious blue carton, a chemical toilet, a grandfather clock, a drumkit, an easel, a taxidermised weasel, a waste paper bin, an espresso machine, a doormat, a rug, a cat-litter tray, and a few other bittybobs. In one corner there is a mop and a pail.

This was to be my home for the next seventeen years. In all that time, the Alpine mist never dispersed. It remained thick, and occasionally quite swirlyish. So, when I sat in one of the musnuds, I could not see the other one, nor any of the other appurtenances. Moving about my sanctum, I kept bumping into things. My shins were a mass of bruises.

I learned to operate the cassette player, and grew fond of the music recorded on the tapes. Each of them contained ninety minutes of skiffle, performed by Emile ‘Stalebread’ Lacoume & His Razzy Dazzy Spasm Band. I also learned to make jelly.

Once a week, I received a visit from the Blavatskyite Being. It explained that it was going to initiate me into the secrets of the cosmos. To do so, it would read a few paragraphs from The Collected Witterings of Madame Blavatsky, and then quiz me on what I had heard. The questions were put in multiple-choice format, which I found helpful. It had a curious speaking voice, sometimes sounding exactly like the star of stage and screen Jack Hulbert, and at other times like his wife and musical comedy partner Cicely Courtneidge. It might yoyo between the two voices within a single sentence.

Every year, on St Bibblybibdib’s Day, it took me to its own domain, even higher in the Alps. Up there, the air was so thin it could not form a mist, and we had to wear oxygen masks to breathe. All day long we played ping pong on its full-size ping pong table. Oddly, every single game we played over those seventeen years ended in a draw, which is technically impossible when playing ping pong in the mortal world. I hoped one day to find an explanation for this in one of the Madame Blavatsky readings, but it remained a mystery. As did the blue carton in my sanctum, which I was forbidden to open.

Dobson notes that he marked the passage of time, at first by cutting notches in his Alpenstock and later by ticking off the days in an Esoteric Reader’s Digest 17-Year Pocket Diary which he found in the sideboard. Then, one Thursday, the Blavatskyite Being makes an unscheduled appearance. The mist is thicker and swirlier than usual. The pamphleteer is told that he has learned all there is to know, plus a bit more, and is now an Adept Of The Secret Order Of Alpine Blavatskyite Beings (Cadet Class). It is time for him to leave, and to return to the mundane world of mortal men. He is bundled out of his inner inner inner etcetera sanctum none too gently, and given a shove, and skitters down the mountain, through the mist, down and down, until of a sudden the mist clears, and he can see clearly, and to his astonishment, there, sitting on an Alpine municipal bench at the foot of the mountain, waiting for him, is his inamorata and poppet, Marigold Chew.

“Marigold my dearest darling dear!” I cried, “I have returned! I am agog to know what has been going on in the world these past seventeen years. Did the Vietnam War escalate after the Battle of Điện Biên Phủ? Did the Busby Babes win the European Cup? Was it ever proven that Alger Hiss was indeed a Communist spy? Did Emile ‘Stalebread’ Lacoume & His Razzy Dazzy Spasm Band top the hit parade? Uncle Joe Stalin – does he yet live? Are Jack Hulbert and Cicely Courtneidge still high-earning stars in the musical comedy firmament? Has Vice President Nixon published his book Six Crises? I have a million questions to which answers are not vouchsafed even by the secret knowledge I have acquired high, high in the Alpine mist!”

Marigold Chew looks at Dobson as if he has gone mad.

“What on earth are you blathering on about, Dobson?” she says, “You vanished into the mist saying you were going to research all things goaty, and here you are back again, ten minutes later. You can’t have learned much about Alpine goats in that time. And what is that lump on your head? It looks very much as if you have been struck on the bonce by a very large pebble hurled by a mischievous and miscreant young Alpine goatherd boy from the nearby orphanage. We must make a complaint to the beadle to ensure the ne’er-do-well mite is given no jelly for his pudding tonight.”

And with that, Marigold Chew takes Dobson by the arm, and they walk away from the Alps, never to return in this lifetime.

NOTA BENE : Thanks to my old mucker Max Décharné for alerting me to the existence of Emile ‘Stalebread’ Lacoume & His Razzy Dazzy Spasm Band, here.

ANOTHER NOTA BENE : Max has kindly provided a snap of the Razzy Dazzy Spasm Band, taken in 1896 or 1897. As he says, they were proper New Orleans street urchins. 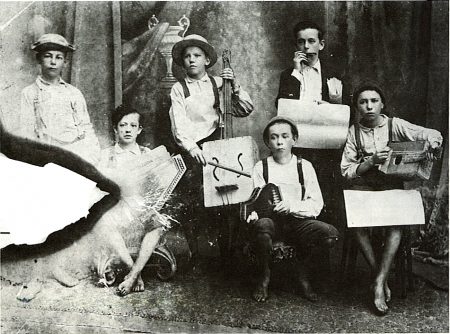