Every now and then I receive letters from readers asking me to give some account of the geography of Hooting Yard and its hinterland. I have a standard reply to such requests, which is to say that through diligent study of the writings you could draw a map yourself. It would involve very close reading, being on the alert for clues and pointers, but all the information any half-competent cartographer needs is present in the texts.

Today, I am going to make things a little easier for aspiring mappers by saying a few words about the train journey from Hooting Yard to that ill-starred fishing village Oâ€™Houlihanâ€™s Wharf. Last week it would have been fairly pointless to do so, but the exciting news is that the branch line, long fallen into desuetude, is running again. Using the proceeds from a winning raffle ticket (number 666, beige) a team of volunteers has reopened the line as a cross between a â€œcountryside heritage family leisure facilityâ€ and a â€œcutting-edge arts praxis installationâ€. I have taken those two phrases from their brochure, a shabby piece of work duplicated on a Gestetner machine, designed perhaps to look like one of Dobsonâ€™s out of print pamphlets. Someone has gone to the trouble of hand-colouring all the covers, though, which shows the fanatical devotion of these enthusiasts. 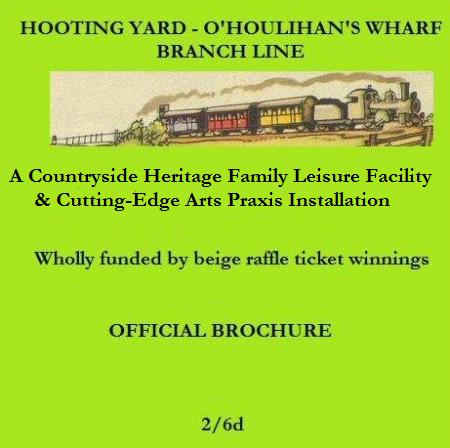 I am not one of these nutters myself, but I know the journey as well as I know the first three books of Paradise Lost, so take my hand, encased in a butcherâ€™s mitten, and I shall lead you along the way.

Our thrilling railway excursion begins, naturally enough, at Hooting Yard. What was once a gigantic terminus alive with hubbub is now a ruin which serves mostly as a roost for sparrows. However, the volunteers have recreated a very convincing facsimile of one of the original platforms, and it is from here that the decrepit steam engine creaks into gear.

It is, of course, the Civic Platform. It had been hoped to place a commemorative copy of the Central Lever at one end, but Hazel Blears put the kibosh on that with a series of threatening letters. Diminutive and bumptious she may be, but she â€“ or her officials â€“ can certainly write poisonous prose. The branch line volunteer who opens the post has been admitted to a clinic for neurasthenics and has taken to wandering the grounds in a daze, like Ronald Colman at the beginning of Random Harvest, without the military uniform, of course, but with the pencil moustache. Anyway, off we go!

The first stop, some five hours down the line on a good day, is Blister Lane. When I say â€œon a good dayâ€, I mean on a day when the train does not sputter to a halt about twenty yards out of Hooting Yard because the track is blocked by cows. This can happen distressingly often, for the fields hereabouts are teeming with cows, thousands of cows, and though they may be content to stand still staring at nothing, the likelihood is that mad Old Farmer Frack will come bellowing and waving his stick and drive them back and forth across the railway line for his own, no doubt profound, purposes. He is not a farmer who can be bribed, so if he is doing his thing with the cows, the train just has to wait.

From Blister Lane we head on to Hoon. There are many who contend that Hoon is a place of myth, like Atlantis or Lemuria. Even if they are right â€“ and remember, there is no definitive evidence either way â€“ that is no reason Hoon cannot have its own railway station. The station itself shimmers, as if in mist, even on a clear day, and eerie sounds echo about its turrets and crenellations, for the station building is both turreted and crenellated, if blurry. It is not advisable to disembark from the train at Hoon.

Nor is it a good idea to alight at the next stop, the Horrible Cave, unless you are an emboldened spelunker. Actually, there is a reasonable chance you may be so, for last time we did a readership survey it turned out that almost three-quarters of Hooting Yard readers have survived terrifying imperilment in caves, though not of course in the Horrible Cave itself. And it has to be said that the Horrible Cave is so horrible that it makes every other cave in any given subterranean system seem like a Prudence Foxglove Sunday School. The branch line volunteers refused to place any health and safety notices at the stations, even here, so you will have to keep your wits about you and use that unfashionable tool, common sense. But if you are a regular reader of Hooting Yard, you will of course have plenty of that.

And so we steam on, still creaking, to the Macabre Village. Please note that this is not the Macabre Yet Goofy Village you may have read about in the works of Jean-Claude Unanugu, nor the same writerâ€™s Goofy But Macabre Village. Those are fictional. This is just a macabre village, with no goofiness to be found, however hard you might search. If you jump off the train here, try not to go too close to any of the buildings, and take a torch with you, the more powerful the better. In fact, take a torch and a bag of pebbles. You can throw the pebbles at anything macabre that looms out of the shadows intent upon attacking you.

Anybody with any sense will have stayed on the train, and be rewarded by arriving some hours later at The Ponds. This used to be a popular destination for picnicking parties, particularly the pond known as Stagnant Inky-Black Fathomless Spooky Pond, where generations of tinies cavorted and capered. Some of them even made it home alive.

From The Ponds it is a short hop to Pang Hill, where the famous Orphanage graveyard is well worth a visit. Take a cotton napkin to mop up your tears. Various mawkish pamphlets are available from the graveyard gift shop, including some insufferably dreary collections of verse by Dennis Beerpint, penned (as he would say) before his reinvention as a twenty-first century beatnik. On that point, it appears that our cherished poetaster has disavowed his earlier work. He issued some kind of manifesto the other day declaring that he intends to rewrite each and every one of his pre-beatnik poems in the beatnik style. Whether or not that is something to look forward to I am not sure. It might be a good idea to snap up as many of his twee verses as you can while you are at Pang Hill, if you can cease sobbing and do a Winslety gather.

The next stop is Pointy Town. The station is, of course, magnificent, and very pointy. Indeed, it is thought to be the pointiest railway station on the planet. Before reopening the branch line, the volunteers made a special effort to eradicate any blunt bits on the station concourse, using a sort of antisandpaper, supplies of which they found untouched in a basement storeroom of Hubermannâ€™s, the gorgeous department store.

And so, finally, to the benighted fishing village itself, Oâ€™Houlihanâ€™s Wharf. For obvious reasons, the timetables are less than accurate, but you should arrive within two or three weeks of setting out from Hooting Yard. You will be exhausted, and your head will be enveloped in steam, but you will I hope experience a Lovecraftian shudder as you step on to the platform, with the sudden, hideous realisation that there is no way back, and you must spend the rest of your days trudging up and down the rotting jetty, befouled seawater sloshing against your boots, and squalls blowing in from the west.

NOTE : Signage by OSM, to whom many thanks. The picture of the train on the cover of the brochure is from Agence Eureka.