Dobson was no stranger to controversy, but rarely did he create so tumultuous a brouhaha as was caused by his pamphlet Hints And Tips For Intrepid Explorers In The Polar Wastes (out of print). Dobson himself had of course never been anywhere near either the Arctic or the Antarctic, and one of the many puzzles he left behind for the unwary biographer is the question of why he ever thought he was qualified to address the subject. He was only too ready to admit to his ignorance of certain matters, made plain in pamphlets such as My Blithering Ignorance Of Vast Swathes Of Ornithology and When It Comes To Ice Hockey, I Have No Idea What I Am Talking About, both of which are tragically out of print.

Yet he felt able to compile a list of hints and tips for polar exploration, and ensured that Marigold Chew ran off more copies on the Gestetner machine in the potting shed than she did of almost any other pamphlet he ever wrote. Indeed, a number of their breakfasts were ruined during a period in the 1950s when the pamphleteer insisted that his inamorata gobble down her kedgeree in double quick time so she could hurry off to the shed to crank out another dozen copies. Oddly, he does seem to have actually had some success in selling them, though this may have been due to the breathtakingly gorgeous mezzotint of a polar bear, by the noted mezzotintist Rex Tint, which was used on the cover. There was a sort of polar bear fad at the time, occasioned by the popular radio serial The Adventures Of Martin The Polar Bear, starring Cicely Courtneidge and Jack Hulbert. The historian and cultural commentator Bevis Sebag has suggested, compellingly, that most of the people who bought Dobson’s pamphlet tore off the cover, placed the mezzotint in a frame and hung it on the wall of their parlour, and chucked the pamphlet itself into the bin.

But some people obviously did read it, otherwise there would not have been a tumultuous brouhaha. And a tumultuous brouhaha there was, with knobs on! Several very foolish explorers went off to the Arctic or the Antarctic clutching copies of Dobson’s pamphlet, to the exclusion of any other written guidance whatsoever. It is fair to say that their lives were in his hands. Because his “hints and tips” were almost entirely spurious, idiotic, irrelevant, wrong-headed, fantastical, and outright dangerous, not one of these several fools ever returned alive from the polar wastes. Hence the tumultuous brouhaha, when their grieving relicts and orphans blamed the pamphleteer and tried to have him prosecuted in a court of law.

There were a few weeks during which Dobson had to face noisy marches and demonstrations, a temporary encampment of earnest young persons in tents outside his house, and some unkind newspaper headlines, including OUT OF PRINT PAMPHLETEER SENT EXPLORERS TO CERTAIN DEATH, BEREAVED TOT SHAMES PAMPHLETEER WITH HEART-RENDING MESSAGE SCRIBBLED WITH CRAYONS ON PLACARD, and ANTARCTIC WIDOWS’ ICE CUBE PROTEST SCUPPERED BY UNEXPECTEDLY BALMY WEATHER SPELL. (Note for younger readers : newspapers in those days were printed on much bigger sheets of paper, and had more words than pictures.) But eventually all the fuss died down, as it usually does. The marches and demonstrations were broken up by charging police horses, the futility of their tentage gradually dawned on the young persons, and the newspapers moved on to other stories, such as VICE PRESIDENT NIXON ATTACKED BY ANGRY MOB IN VENEZUELA and LISTENERS REACT WITH FURY AS ‘THE ADVENTURES OF MARTIN THE POLAR BEAR’ IS CANCELLED BY OUT OF TOUCH RADIO BOSSES – COURTNEIDGE ‘LIVID’ SAY PALS.

Throughout the tumultuous brouhaha, Dobson himself remained silent. Partly, or indeed wholly, this may have been because his position was indefensible. This was a pamphleteer, remember, whose sole advice, on the subject of unimaginably harsh gale-swept subzero temperatures in the frozen hell of the polar wastes was “Best pack a woolly”.

In a new monograph, the reputed Dobson scholar and polar explorer Loopy Pangloss has been through the pamphlet with a fine toothed comb. In her foreword, she admits that it is inconceivable to her that such a titanic figure as Dobson could have written a pamphlet entirely devoid of sense. Her task, she says, is to winnow from it something, anything, that could in some way restore the pamphleteer’s reputation among the polar exploration community. Triumphantly, she alights upon Tip Number 12, reproduced here in full:

You might, in the unimaginably harsh gale-swept subzero temperatures in the frozen hell of the polar wastes, become peckish. If so, wrap up warm and plod out into the ice and snow until you see a polar bear. These are big fierce creatures, but using skill, judgement, and weaponry, you should be able to kill one. That done, drag the slaughtered polar bear back to your nice warm hut. Using an axe, chop it to pieces, each piece being no bigger than a baby’s clenched fist. Sort the chunks out by type, i.e., fur, bone, sinew, fat, flesh, innards, what have you. Select the chunks that look toothsome, and place them in a large pot. Fill the pot with water, and bring to the boil. Place a lid on the pot and let it simmer for hours. Top up the water from time to time. While it is cooking, feed the unselected less toothsome chunks of polar bear, raw, to the huskies. Anything they leave can be put into a blender and liquidised. Heat this in a pan until it is the consistency of mayonnaise. Transfer the decisively-boiled polar bear chunks from the pot to a plate, pour over the liquid from the pan as a sauce, and tuck in.

Important note : however toothsome it appears, on no account should you eat the polar bear’s liver. It is highly toxic, containing a terrifyingly high concentration of retinol, the form of vitamin A found in members of the animal kingdom. If eaten in one meal, 30 to 90 grams of polar bear liver is enough to kill a human being, or to make even sled dogs very ill. Believe you me, you will not want to come down with a case of acute hypervitaminosis A. The symptoms include drowsiness, sluggishness, irritability, severe headache, bone pain, blurred vision, vomiting, peeling skin, flaking around the mouth, full-body skin loss, liver damage, haemorrhage, coma and death.

As Ms Pangloss points out, this is true. “For all its faults,” she concludes, “Dobson’s Hints And Tips For Intrepid Explorers In The Polar Wastes (out of print) is not wholly worthless. We should give him credit for that.” 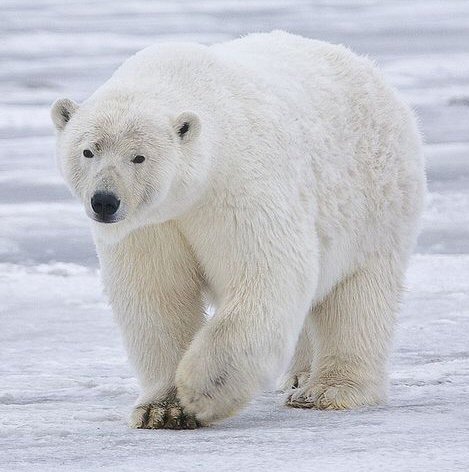 A polar bear : do not eat its liver