Elberry : what pillow do you use? is it stuffed with the feathers of birds or the skulls of mice?

Elberry : and the sand, can you expand on its provenance? do you use the sand from the Alamogordo Test Range, or common or garden sand? is it related to the sand nightly deployed by the Sandman? Is it sand from the sandy road of Eliot’s Waste Land?

Frank Key : It is coarse sand, dredged from the vasty deep, then spread out, by much raking, to dry under a Panglossian sun, before being poured into the pillowcase through a gorgeous ornate metalwork funnel

Elberry : How do you do the dredging? Do you have an industrial dredging machine?

Frank Key : I use a mighty concrete dredger barge, built to Lambot’s original design rather than the later Gabellini or Edison models.

Elberry : i used to teach at Zeppelin, i think they make dredging machines but i am unsure if they are suitable for vasty deeps. Could you just use a spade? i ask as i thought about doing a bit of light dredging, to keep fit

Frank Key : Use of a spade beneath the vasty deeps is fraught with risk, but will undoubtedly boost your manliness. Or you might drown.

Importantly, here are two pigs aboard a concrete boat moored in the mud at Burnham-on-Crouch. Readers will recall the town as one where Daniel Defoe reported the existence of fogwives. He had nothing to say of pigs and concrete boats, but it is unlikely, given the sunlight, that we are looking at mistpigs. Note the heavy chain tethering the concrete boat to the mud, to ensure it does not drift off into the River Crouch and cause maritime havoc. 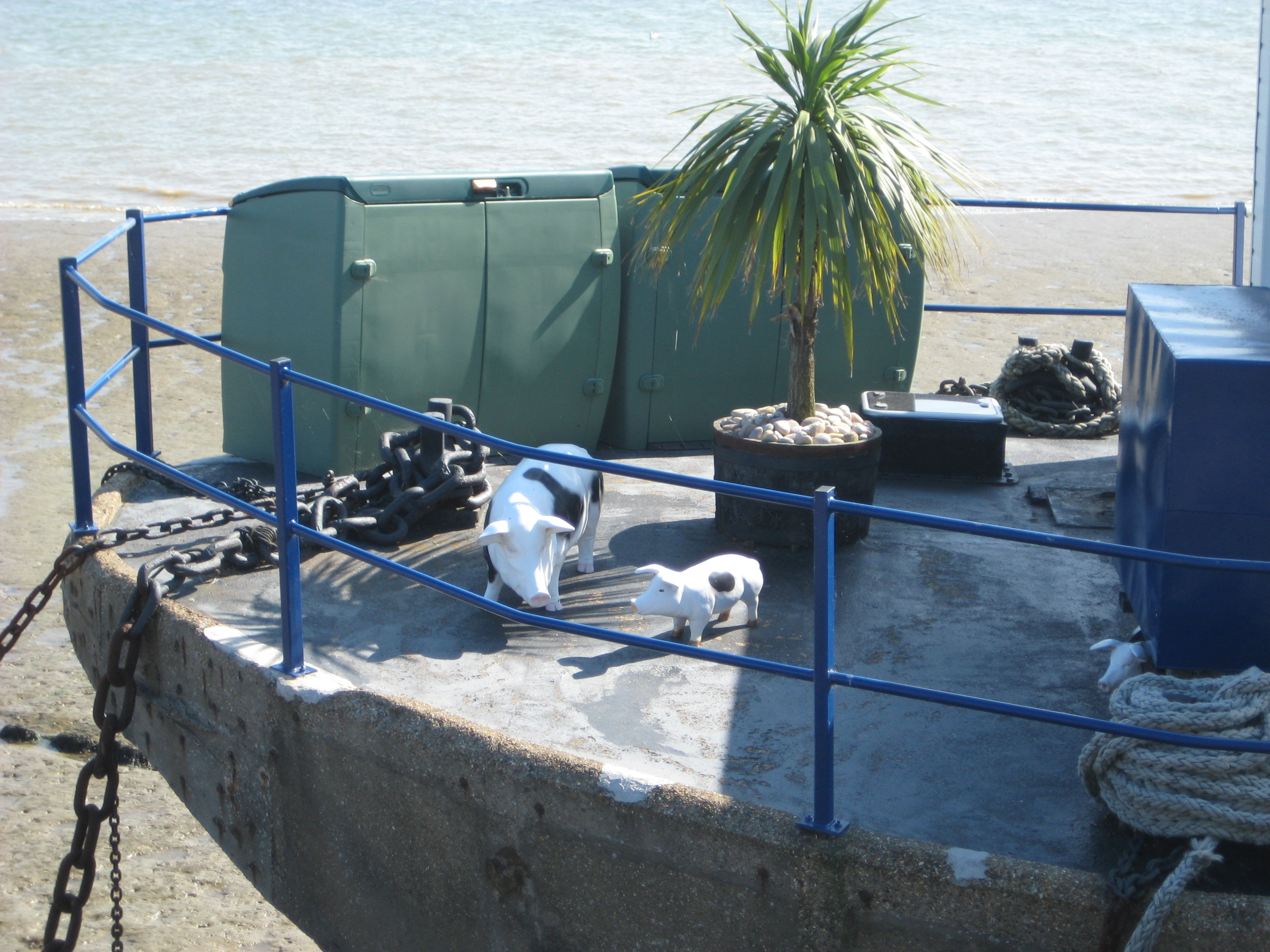 A boffin was pouring bleach into a funnel when along came a guttersnipe.

â€œHow now, boffin,â€ said the guttersnipe, â€œI am but a poor guttersnipe and for raiment I have only rags, as you can see. If I become a boffinâ€™s assistant I can cover these rags with a fine white coat and then I shall not be spat upon by citizens as I toil along the lanes of this shining yet merciless city. Can I pour that tinted bleach into the funnel for you? Then you would be free to go and take a nap, or to think higher thoughts.â€

Now as it happened, the boffin had been thinking how useful it would be to have an assistant. Yet the words of the guttersnipe set him atrembling, and he had to steady his hands as he continued to pour the blue tinted bleach into the funnel.

â€œYour offer is most welcome, young scalliwag,â€ he replied, mistaking the guttersnipe for a scalliwag, â€œBut I fear I must decline. Let me explain why, while I pour the rest of this cobalt blue tinted bleach into, or rather through, my funnel. I had a very privileged upbringing. I grew up in a castle on the coast. Gulls, guillemots and stormy petrels perched on the windowsill of my nursery. My parents employed numerous servants. As a boffinâ€™s assistant, you would be a sort of servant. Ma and Pa were unfailingly kind to me, but they mistreated their valets and maids and pages and cooks and chauffeurs and biddies etcetera etcetera terribly. One was confined to an oubliette and fed with contaminated lemon curd. One was thrown into the sea in a sack. Another had his head kicked in. A butler named Jarvis had his reputation sullied through gross defamation of his character. One of the maids was trampled under the huge thumping feet of Paâ€™s robot brontosaurus. All of them were regularly beaten with shovels. One was forbidden ever to wash his hair. One was made to sprint back and forth to the post office, repeatedly, despite being in the desperate stages of an ague. None of them were permitted raincoats. A Cyclopean page was ridiculed. Another page was torn limb from limb, tied to a quartet of wild stallions. The underbutler had his shoelaces destroyed. One was burned with flaming tongs. They were all made to sleep in a dank and dingy cave at the foot of the cliffs. Ma hacked into one parlourmaidâ€™s computer and left it riddled with viruses. Another was upbraided in the presence of a priest. One was cast adrift in rough seas in a boat made of concrete. A hairy gardener was sent off to a zoo. When any of the servants died, their corpses were hung on gibbets and left to rot. No cruelty was beyond Ma and I vowed, when I reached adulthood, that I would never have a servant of my own, for fear of what I might be capable of. That is why I am pouring this thick cobalt blue tinted bleach into the funnel myself, even though my towering intellect would be better engaged cogitating upon the deepest profundities of existence, as you so judiciously suggest.â€

The guttersnipe nodded, and limped sadly away. Later, by a pond, he wept, for in his short and brutish life he had never encountered a boffin of such moral rectitude.

Source : Mawkish Fables Of Punctilio And Rectitude For Tiny Tots by Dobson (out of print).

I was reading Electric Universe by David Bodanis, and was struck by his comment that Thomas Alva Edison spent an inordinate amount of his time working on plans for a concrete boat. It pleases me to learn that J L Lambot got there before him, in 1848. See A Short History Of Concrete.