Since the turn of the year I have been immersing myself in the novels of Ronald Firbank. The quotation above, from Valmouth (1919), is a list of the centenarians of the eponymous townlet, where something in the air means “Valmouth centenarians will be soon as common as peas!” This is the only one of Firbank’s books I have read previously, and because I have a chronological list of every book I have read over the past thirty years, I can date that earlier reading to 1989.

Two years earlier, in 1987, under the Malice Aforethought Press imprint, I published a set of twenty-six alphabetic potted biographies entitled A Zest For Crumpled Things. The fifth of these was named . . . Violet Ebbing. I still remember the weird tingle of surprise as I read Firbank in 1989 and saw that name, which I had plucked out of the aether. What spooky forces were at work?, I wondered, and still wonder.

I don’t think I have ever put the text of A Zest For Crumpled Things online, so I shall endeavour to do so at some point. Meanwhile, it seems you can pick up a copy for the bargain price of £88.44 here.

Comments at Hooting Yard are moderated – that is, I have to approve them before they appear. WordPress cleverly sorts out the spam and deposits it in a separate inbox. I used to keep a check on this to ensure no legitimate comments had accidentally been dispatched there, but there are currently hundreds of spam comments arriving daily. My brain is already puny and curdled enough without reading through all that bollocks just in case a witty and learned comment from one of my readers has been dumped there by mistake. I mention this in case anybody is sitting there fuming and cursing because their comment has not appeared. This will not be because I have failed to approve it, rather that it has been erroneously designated as spam and I have never even seen it. If your comment does not appear, please either resubmit it or alert me to its absence by email.

Few double-acts in the history of the universe have ever been so magnificent as Simon And Garfunkel Crosse & Blackwell Mr Key and Lepke B. Those who witnessed our only ever collaboration at the (now demolished) Jellyfish Theatre in October 2010 are still too stunned to speak about it, even in hushed tones.

Now, the legendary duo is reforming for Resonance104.4FM’s tenth anniversary party on the first of May. We will be on the bill alongside luminaries including Bob Drake and Kinnie The Explorer. Full details, including ticket-ordering linkage web-wizardry, here.

I strongly recommend that you attend, and whoop your cheers, and throw your hats in the air, and other such expressions of unbridled enthusiasm, including swooning with overexcitement.

Over the past week or so, your super soaraway Hooting Yard has been inundated, inundated I tell you!, with spam comments. Usually there are three or four a day, now there are hundreds. What this means is that I cannot be bothered to skim through all the bollocks* to whittle out any genuine comments that are sometimes misdirected down the spam chute. So, if you send a comment and it fails to appear in due time, please either try again or send me an email to let me know.

ADDENDUM : * I am reminded that this useful word ought to be spelled in the Beckettian manner, i.e. ballocks.

Exciting news from the BBC. Werner Herzog has been persuaded to direct a forthcoming episode of twee bucolic period drama Lark Rise To Candleford. This follows the unprecedented global success of the scene where the peasant sprawled in the drainage ditch recites Captain Beefheart’s Old Fart At Play.

Herzog is currently working on the screenplay for his episode, which is likely to feature either a conquistador and a gang of howler monkeys laying waste to Dorcas Lane’s Candleford post office, and/or an attempt by a deranged impresario to build an opera house in the squalid village of Lark Rise. 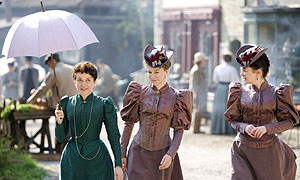 Here is a rousing version of “O Say Can You See”, recorded yesterday at the end of Hooting Yard On The Air, on which I am accompanied by my son Ed. As you can hear, I was quite overcome with emotion and narrowly avoided having a fit of the vapours…

O Say Can You See (Duet)

Monday morning, time for a rant. Given that I persist in taking the Grauniad, I suppose I have only myself to blame that while the day is yet young I was minded to fling the paper across the room and utter execrations. What bothers me is that their highly-paid columnists – at least, paid a fat lot more than I am, i.e. nothing – betray such ignorance. It is the little details that vex me… those admittedly minor errors which, I sense, one only makes if lacking the broad sweep of what used to be called “general knowledge”.

Today’s case in point comes from fatuous television reviewer Sam Wollaston. Reviewing last night’s new Sherlock on the BBC, he notes that the modern-day setting of the series means the characters get around by black cab rather than by “the handsome carriage”. The what? He means the Hansom cab, of course. Anyone who knows that would not mistype it as “handsome”. The heavens will not fall in, the planets will continue to spin, but yet this slapdashery pains me.

A while ago, another Grauniad television reviewer, addressing himself to a new adaptation of The Turn Of The Screw, repeatedly referred to the story’s presiding evil spirit as “Peter Clint”, rather than “Quint” – this in spite of the name being clearly visible, at one point, upon a tombstone. Again, we are dealing here with what I would consider general knowledge. Henry James’ ghost story is a classic, certainly a piece with which I would have thought anybody employed in “cultural” journalism would be familiar.

Taking the cake, though, is Grauniad America editor Michael Tomasky, who sets us a history quiz. The first question is:

1. Arguably the first great work of history in the Enlightenment era was by Edward Gibbon and in six volumes described:

a. The Greco-Roman wars

b. The Rise and Fall of the Roman Empire

c. The “Mohametan” conquest of Iberia

In the notes at the end of the quiz, he announces smugly “If you didn’t get this one, you should have stopped right then and there.” It is difficult to “get” one where none of the three alternatives is correct. Gibbon’s great work was, of course, The History Of The Decline And Fall Of The Roman Empire. No doubt I will be accused of nit-picking, but it seems to me this is yet another example of blithe lack of attention to detail. And a narrative of rise and fall would be a very different book to one limited to decline and fall – the phrase, itself, one which the literate instantly recognise.

Incidentally, if the Grauniad and the rest of the papers still employed a sufficient number of subeditors, these embarrassments would be much less likely to occur. Bruce Willis is a man who is rarely right about anything, and he was never more wrong than when he wrote the immortal words “Proofreading is for pussies”.

There are certain impenetrable mysteries which tug at our imaginations and allow us no peace of mind. I am sure I am not the only person to be kept awake at night, tossing and turning, chewing the pillow, my brain fuming as I ponder in perplexity for the umpteenth time whether, for example, Badge Man was a living, breathing, armed maniac or merely a trick of the light, whether the Loch Ness Monster truly exists or is just a figment in the minds of socially inept men in anoraks who like to spend their time sitting in the lochside drizzle with Thermos flask and binoculars, whether it is permissible simply to wipe over one’s socks when performing wudhu. These are all terrifically mysterious matters, and there are many more, so many more it is a wonder we are not stunned into mental collapse.

Every now and then, we stumble upon some fragmentary clue which promises to shed light where previously there has been only darkness, ignorance, and numbing stupidity. One of the greatest puzzles gnawing away inside my head has long been to find an answer to the question: what did Tiny Enid do, once she had grown up and was no longer tiny? Though I am still unable to give a full account of her adult doings, I can, today, say one thing with a modicum of confidence – she dressed up as a bat. 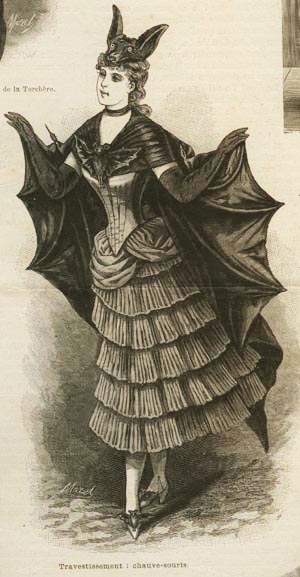 There remains some doubt whether this really is Tiny Enid. It may be an impostor, or even a hallucination brought on by a surfeit of lampreys. I am clutching at straws, dammit, but sometimes that is all we can do.

I know I shouldnâ€™t allow such twaddle to exasperate me so much. I know it is a sign of weakness, even of imminent mental collapse, when one feels compelled to post a comment at the Guardian. But alas, I couldnâ€™t help myself. To discover the cause of my intemperance, go and read this. If you canâ€™t bear to wade through all the comments, mine is here. (It will be distressingly familiar stuff to Hooting Yard readers, of course.)

Now I am going to apply a cold compress to my forehead, and throw pebbles at swans.